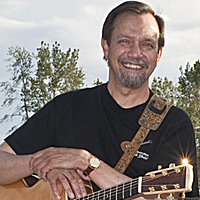 Barry Truter was born in India, lives in Vancouver, BC, and has been a traveller for much of his life. His music and songwriting are influenced by the places he has lived and worked including India, Fiji, USA, England, Canada, and a spell at sea working on a tramp freighter.

Barry is a co-founder of the Georgia Strait Guitar Workshop (GSGW), and teaches guitar privately and at music camps in the Pacific Northwest. He performs with Vancouver-based folk group Fraser Union. But above all he loves to sing and jam with friends in the kitchen, on the ferry, in a coffeehouse, at a music camp, on a protest march, at a sea festival and wherever live music can be found. As he says, "May there always be the joy of music in all our lives."