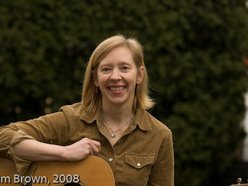 Carol Elizabeth Jones has made her mark as a singer of traditional mountain music and as a writer of new songs in the old tradition. A recording of the Coon Creek Girls, some good friends, and the Mt. Airy Fiddler's Convention all helped get her started in music in her late teens. As a member of the Wildcats and the Wandering Ramblers, she combined well-honed vocals with sharp-edged string band music. With James Leva she recorded three acclaimed albums of original material. As part of the Heart of a Singer project with Hazel Dickens and Ginny Hawker, she recorded memorable duets and trios, which have enjoyed a second life as part of the O Sister Women in Bluegrass collection. Carol Elizabeth has toured Africa, Asia, Great Britain, Canada and the U.S., and has taught vocal workshops at the Augusta Heritage Center, Puget Sound Guitar Workshop, the Swannanoa Gathering, California Coast Music Camp, and others. Originally from Berea, Kentucky, she now lives near Lexington, Virginia, with her daughter, Vivian. In addition to her active musical life, Carol Elizabeth is also the Director of the Literacy and Language Center in Lexington.