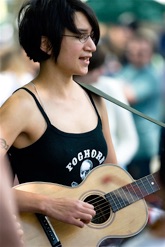 Originally from Stevensville MT, Charmaine Slaven moved to the Seattle area in 2000 and began her pursuit of a career. After trying her hand at many lines of work, from administrative to veterinary, she fell in love with old time music and dance at the 2005 Portland Old Time Gathering. There, she met The Tallboys and soon started performing with them, flatfooting and then also playing guitar. Around the same time, she and Charlie Beck started their musical duo, Squirrel Butter. About a decade later, they founded their country music project, The Lucky Shots. Charmaine has gained a reputation for her fun and engaging method of getting folks dancing and playing music together. She has a natural knack for teaching and organizing, and has become an anchor in the Pacific NW old time music and dance communities.