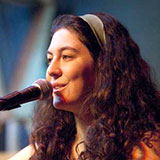 Coty Hogue grew up in Montana, but it wasn't until she went west to Bellingham, WA that she was exposed to and became interested in folk, bluegrass, and other forms of traditional music. She went on to complete a Master's degree from Appalachian State University studying Appalachian music. She has recorded two albums and tours frequently with collaborators Kat Bula and Aaron Guest. Grammy nominated Alice Gerrard (Hazel and Alice) calls Coty "œan impressive young talent -- an amazing, powerful singer and instrumentalist/songwriter." Her rendition of the song Going to the West charted #1 on the FOLK-DJ charts and song Oh Wind is featured in the independent film Neon Sky.