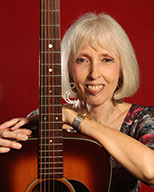 Dede Wyland's pure and compelling voice has enchanted audiences around the globe, and her driving rhythm guitar has powered the sound of numerous bluegrass and acoustic bands including the popular and ground-breaking Tony Trischka & Skyline. She got her start in her native Wisconsin, playing throughout the Midwest and Central states with a number of groups, including 'Grass, Food & Lodging, a young Milwaukee-based band with a large and devoted regional following. During her years as a touring musician Dede graced the stages of the top bluegrass and acoustic music festivals, concert halls, and clubs, both in the US and abroad.

Since moving to Maryland in 1990, Dede has become a sought-after vocal instructor in the Washington, DC area. In addition to a full schedule of private lessons, she has taken her expertise to workshops and music camps from Tucson, Arizona to Somerset, England. Her recordings and concert performances have earned her the Washington Area Music Association's 'Wammie' awards for 1999, 2004, 2005, and 2006 (Bluegrass Vocalist of the Year).

As a teacher, she uses her in-depth knowledge of the human voice and her supportive manner to help amateurs and professionals alike realize their vocal potential.