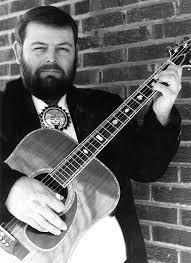 Eddie Pennington has been an instructor at PSGW many times since 1989. His style of playing is the Western KY Thumbpicking style popularized by the late Merle Travis, and later incorporated by such greats as Chet Atkins and Jerry Reed. Pennington was raised near the same area in Western KY as Travis, and was able to often visit Mose Rager the man that Travis credits most for helping him learn to play.

Eddie Pennington, a licensed funeral director/embalmer and the Caldwell County Coroner, has been involved in the folk and traditional music world since 1992. In 1986 & 1987 Eddie won the National Thumbpicking Contest in Mt. View, Arkansas, and helped establish the International Thumbpicking Contest called The Home of the Legengs thumbpicking contest in Muhlenberg County, KY. He has played many National folk festivals. Other appearances have been: the Smithsonian Institution's American folklife festival in Washington DC., the 1996 Olympics, in Atlanta GA, and the NPR radio series Folkmasters & American Routes. He was part of the tour Masters of the steel string guitar in 1999, and 2000. He has been to France playing his style of music. Not only has he taught at PSGW, but also at Augusta Heritage and SAMW music camps. He is scheduled to play at the Kennedy center in Washington DC in April 2002. In 2001 he was awarded the first traditional artist award in the KY Governor's Award in the Arts. In Sept of 2001 he was awarded the nations highest award in the traditional arts, The National Heritage Fellowship Award, by the National Endowment for the Arts in Washington DC, and joins the ranks of such trditional artists as Doc Watson, BB King, Bill Monroe, Earl Scruggs, Wayne Henderson, and John Cephas. Eddie often performs with his son Alonzo and daughter Rosebud at festivals and universities. He can be reached for bookings at www.eddiepennington.com or 270-365-5152.