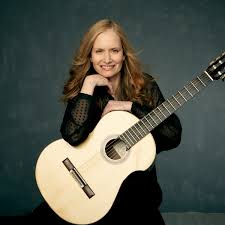 International performing and recording artist, Hilary Field, has garnered praise for her dynamic virtuosity, her sensitive musicianship, and for the emotional depth she brings to the heart of classical guitar music. Hilary has held faculty positions as the head of the Guitar department at Seattle Pacific University and Pacific Lutheran University in Washington State. Hilary is a past winner of the Northwest Young Artist Series Competition and was the first guitarist to win the Frances Walton Soloist Competition. She has released several award winning CDs, including her debut recording, Music of Spain and Latin America, which was an award winner for Classical Album of the Year by the National Association of Independent Record Distributors. Other CDs include Ballad Stories, Siente, Cantilena, Airoso - guitar and viola, and Premieres. Hilary was recently sponsored by the US Embassy to perform and tour in South America, and has been a featured performer in international guitar festivals such as Festival Entrecuerdas in Chile, Festival Internacional de Guitarra ICPNA in Perú, Série Grands Concerts in Québec, the Long Island Guitar Festival in New York, and the Guitar Masters Series in Orlando Florida. She has received grants for composing and performing new music by the Seattle Office of Arts and Culture, 4Culture, and Artist Trust. Soundboard, the official magazine of the Guitar Foundation of America notes “Field plays everything with a refined musicality, immaculate technique, and unfailingly lovely sound.” The Seattle Times exclaims that classical guitarist, “Hilary Field, is a dynamic player. She doesn’t just recite what can often be complex work, but imbues it with fire and grace.”