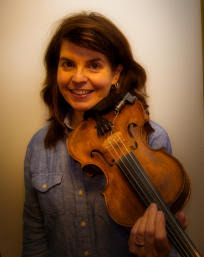 Seattle native and fiddler Mary Simkin-Maass discovered bluegrass music in the 1990s and has never looked back. Mary’s bluegrass fiddling and singing career began with Who’s Driving?, and continues currently with both the Downtown Mountain Boys and the Cliff Perry Band. In recent years, Mary has enjoyed expanding her musical horizons in the directions of country music and western swing traditions, getting her start with Cahalen Morrison & Country Hammer, and continuing with her Seattle-based combo, the Swing Bringers. Mary frequently freelances in performance and in the studio, sitting in with the likes of the Kathy Kallick Band and Western Centuries. You may even find her playing for contra- and square dances. A self-professed “tone nerd,” Mary is constantly in pursuit of the richest, fattest tone, the most lyrical melodic line, and a solid groove to set toes tapping.