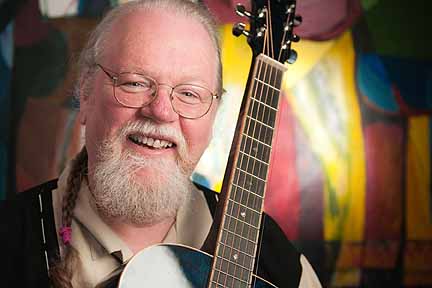 Orville Johnson is a singer, instrumentalist, record producer, songwriter, session player, teacher, and, above all, an instinctive and sensitive musician. As his entry in the Encyclopedia of Northwest Music (Sasquatch Press 1999) states, he has been a vital figure on the NW music scene in the thirty-some years he's lived there, appearing on over 400 CDs, movie and video soundtracks, commercials, producing 21 CDs for other artists, hosting a roots music radio show, and appearing in the 1997 film Georgia with Jennifer Jason-Leigh and Mare Winningham, on the Prairie Home Companion radio show and on Jay Leno's Tonight Show. Orville is also known as a patient and insightful teacher of music and has taught often at the Puget Sound Guitar Workshop as well as the International Guitar Seminar, Pt. Townsend Blues Workshop, Euro-Blues Workshop, Greater Yellowstone Music Camp, B.C. Bluegrass Workshop and others. He has several teaching DVDs and CDs of his own music available.